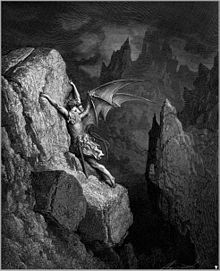 We have to be all those difficult things like cheerful and kind and curious and patient, and we’ve got to study and think and work hard, all of us, in all our different worlds, and then we’ll build…" ... "And then what?" said her Dæmon sleepily "build what?" "The Republic of Heaven."

It's been about a week since I've finished the last chapter of the series, and I'm still absolutely floored at what a magnificent journey it has been and still reeling from the emotional roller-coaster that the last chapters have been. The series starts of with so many open mysteries and ends them all with such grace that you can only wonder at it in awe. I'm glad that such a series exists, that I came to know about it and had the extremely grateful opportunity to read and enjoy it. I'm a mere mortal and I'm sure I can't do this series justice by reviewing it, but I shall dare to try anyway.

His Dark Materials is an epic fantasy trilogy consisting of three books:

The story is set in a parallel universe not unlike ours (although in the beginning of the modern age), but with Dust, dæmons, the Alethiometer, witches, angels and armoured bears. Lyra and her dæmon, Pantalaimon are off to a great adventure to the North with the Gyptians where they'll need to rescue children who have been kidnapped by the Gobblers. On her journey, Lyra encounters the witches and armoured bears, seeking their help in her task. With courage, cunning and the help of Iorek Byrnison the armoured bear, she takes on the evil Gobblers. Towards the end, she has to choose between staying back or following her father into another universe to seek closure for a friend she betrays accidentally.

The action, adventure and mystery in this book make for a gripping narrative will keep the reader hooked to solve the puzzle. A brief chat between the witch Serafina Pekkala and the aeronaut Lee Scoresby contrasts the politics of both sides. The exchange of words between Lyra and her father towards the end throws light on the book's philosophy.

Finding herself in a strange new world (Cittàgazze), Lyra wanders and finds another visitor, Will (from our current universe) and thus begins another adventure to find Will's father, John Parry who is believed to have travelled across to another universe. They enter Will's universe and find themselves in trouble because the Alethiometer gets stolen by one of the members of the Church and they have to find a certain "Subtle Knife" to get their Alethiometer back. After a long fight with Knife's owner in Cittàgazze, they manage to get hold of it and soon discover it's magic - it's a knife that can cut through the very fabric of time and space to create a portal into another Universe! So, the children use it and get back their stolen stuff with a clever plan. Lyra also makes a new friend called Dr Mary Malone whose research into Dark Matter turns out be similar to Dust. Meanwhile, Lyra's old friend Mr. Scoresby is assisting Will's father find the children. Unfortunately, also looking for Will and Lyra is a unit of the Church, headed by Mrs Coulter.

The second book introduces elements of science-fiction and builds on the growing tension between the freethinkers headed by Lord Asriel and the Church. There are a few heartbreaking moments when Lee Scoresby defends against the Church's army and John Parry meets his son, Will.

We find that Mrs Coulter has kidnapped Lyra and many groups are looking for her including Will and the armoured bears whom he befriends, Lord Asriel's army and the Church's army. As is expected, there's a showdown between the three forces, and the children manage to escape to another universe, Mrs Coulter is captured by Lord Asriel's army. Meanwhile, Dr Mary Malone crosses into a strange universe with small elephant-like creatures using wheels in addition to their limbs. As the children go looking for the world of the dead, we find that the Church has dispatched a hitman to kill Lyra to prevent a prophecy which would end the Church's power. Mrs Coulter escapes to the Church, spies on them and learns of another plan to assassinate Lyra. With the introduction of Metatron, the Authority's commander, the fate of the battle between Lord Asriel and all of the Church looms in the balance.

After an epic battle, we find the children with Dr Mary Malone who tempts them into falling in love by telling them her story. What follows is an absolutely amazing sequence recreating the traditional Adam and Eve story - the temptation, the fall, the realization and acceptance.

There are lot of fantasy books and lots of beautiful poems, but in my opinion none can match the breathtaking mix of fantasy and poetry that is His Dark Materials. Yes, there are a few loose threads, but I think they are far too minor to worry about. To crave for a 'happy lived together ever after' ending is to miss the point of the book - there's no Paradise after all! If you want one, create it yourself!