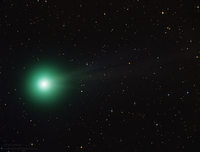 Panspermia (from Greek πᾶν (pan), meaning "all", and σπέρμα (sperma), meaning "seed") is the hypothesis that life exists throughout the Universe, distributed by meteoroids, asteroids, comets, planetoids, and also, by spacecraft in the form of unintended contamination by microorganisms.

Comet Lovejoy C/2014 Q2 is one of the latest discoveries by amateur astronomer Terry Lovejoy. It is a stark reminder of how little we know about the universe we inhabit and how any one of us can make a difference in expanding our collective knowledge, if we decide to make a dedicated effort.

Here's a short sci-fi story to commemorate this tiny blip in the space, which will only happen again after 8000 years!

The year is 2148 and humanity has made huge advances in the areas of autonomous space mining and exploration. Hermes, officially CP-142, is a comet probe tasked with exploring the Local Group, a closely bound collection of around 50 galaxies. The latest comet assigned to Hermes is Comet Lovejoy C/2014 Q2 named after it's discoverer Terry Lovejoy. A preliminary report on the comet has indicated huge reserves of Manganese, Palladium, Rhodium which would be quite profitable to mine in their own right. But Hermes has a more important duty to perform than just mining the comet. It has to retrieve the Briefcase.

A few years ago the news of seemingly intelligent radio signals received from Comet Lovejoy had created a huge buzz among the United Space Agency and a few hobbyist astronomy forums. But the information quickly disappeared from the news and it was dismissed as a false alarm. A quick decision was taken by the government to keep further information classified until the comet was explored and the mystery was resolved. A few images taken by the space telescope G-32 had hinted at a possibility of a rectangular object, positioned in one of the comet's valleys, anchored to the surface using harpoons on the four corners. An engraving of luminous radium, serving as a beacon, parallel to one of the sides made the object look like a briefcase of comically large size. The few people who had access to the knowledge about the radio signals and the Briefcase were ecstatic at the discovery and they worked day and night on every bit of information available.

Hermes performed the retrieval manoeuvre, which involved unhinging the harpoons, latching onto the object and anchoring it to the spacecraft successfully. While most of the operations were autonomously intuitive to Hermes, multiple simulations were conducted by the ground staff to make sure there were no errors. The scientists at United Space Agency immediately started experimenting on the object by collecting samples and sending instructions to general purpose robot aboard the spacecraft. A C-14 instruction on the collected sample dated the object back to at least 4 billion years ago. The scientists had the first proof that the object was not a part of the comet but was indeed put in place by an intelligent entity. Soon, this knowledge terrified them. What intelligent entity was alive 4 billion years ago, a time when the earth was merely 500 million years old? And what messages and mysteries did they enclose in the Briefcase?

As soon as the spacecraft landed, the object was retrieved and excavated as per the findings of an X-Ray report. The inside of the Briefcase seemed thoughtfully and meticulously packed. The primary compartment consisted of five metallic cylindrical containers, each sealed at the top. In addition, there was a pile of laser-etched thin graphene sheets, stacked for efficient storage. Towards the bottom, there were square metallic containers. There was an atmosphere of awe and frenzy as the scientists, mathematicians and astronomers tried to make sense of all the information, the first of its kind in the history of mankind.

After months of careful analysis the researchers finally had an answer. The graphene sheets contained a mapping of their words and a visual representation of their objects. Starting from geometrical shapes, the mappings progressed until concepts such as "planet", "life" and "seed" could be translated. It was concluded that the cylindrical containers were a cold storage of their genetic material. The metallic containers seemed to contain quantum storage of terabytes of information archives, waiting to be deciphered. Using the graphene sheets as their Rosetta Stone, the researchers soon decoded all the archives, the first among them being a message from them:

"Greetings, dear reader. It seems that our panspermia missions have succeeded..."