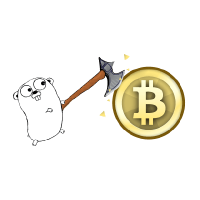 With today I will be completing six months of working with the btcsuite team and I want to write about some of the major work that I've been doing during this time.

I've been working mostly on btcwallet which implements a bitcoin wallet and provides all the functionality required by the end user to start receiving and spending bitcoins.

bitcoind has a notion of accounts for keeping track of ledgers of multiple user-defined groups. They can be very useful for cases when a single wallet instance needs to maintain balances for multiple users.

For example, consider a service provider that accepts prepaid credit, where each customer can top-up and spend his credits. A wallet could create an account for each customer and simply track the account balance. Security and privacy would be important to make sure that no customer can access or steal another customer's credits.

Unfortunately, the implementation of accounts in bitcoind is far from perfect and this leads to a lot of "covering-up" in most of the account-related RPC calls. Ideally, a wallet should treat each credit/debit as belonging to an account and track them individually. Instead, bitcoind has a "bolt-on" accounting system that leads to issues like "weird balances". Here's a issue on github discussing this in more detail.

Previous versions of btcwallet only used the default account and did not support multiple accounts. With the introduction of waddrmgr, the new wallet address manager, multiple account support became possible but it needed to be integrated with the wallet core and the RPC server.

I worked on this in PR #155 and btcwallet now provides two new extension RPC calls i.e createaccount, renameaccount which can be used to manage accounts. Most of the account-related RPC calls are compatible with bitcoind in that they work with accounts as expected.

In case a user doesn't want to setup a wallet but just import a single address, bitcoind provides the RPC call importprivkey. However, if the user just wants to track the balance of the address, they should not need to provide the private key. With btcwallet, one can do the same using the public key or just the address itself. This feature is available using the two new extension RPC calls importpubkey and importaddress. It was implemented in PR #204 and I'm currently working on adding tests for the database upgrade before it is merged.

One of the major security concerns with bitcoin wallets is address reuse. Ideally an address must be not used once it's private key has been used to sign a transaction. To prevent this, in PR #207 I worked on flagging used addresses so that it's easier to query and prevent address reuse.

I worked on an initial version of the wtxmgr, the new transaction store, to rewrite it to use walletdb backend instead of file backend. However, it also required a rewrite in the way data is stored in boltdb compared to the older file format for efficiency and is currently being worked on in PR #217 by jrick.

I've learnt a lot during the past six months and I hope to continue contributing further to btcwallet and btcsuite. I think good code is never complete without relevant docs and meaningful tests so I want to make it a point to write better tests and docs. Also I'd like to make a regular post on the latest work that's going on in btcsuite

btcwallet is being actively worked on. You can see what's in store in the btcwallet roadmap,

I'm most excited about SPV mode support as it means the user can start using btcwallet without access to a full node.

If you're interested, you can check out the project on github or chat with the team on IRC