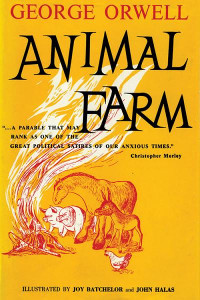 If you want a vision of the future, imagine a boot stamping on a human face - forever.

Animal Farm is a short book by George Orwell but don't let it's small size and cheerful title fool you because this is not a fairy tale. It's a cautionary warning to all future generations about human nature - greed, narcissism, power and corruption. Orwell had a unique insight into the psychology of various sections of the society with relationship to their leaders and brilliantly portrays them as different animals in the farm. If you haven't already, do yourself a favor and read this book. It won't take more than a day to finish it.

The story starts off with a rebellion by all animals united against a common enemy: Mr Jones, the farm owner. Two pigs - Snowball and Napoleon hatch a plan and together with the support of horses, dogs, geese and all animals, are successful in driving the farmer out. Rejoicing at the revolution, they set out to re-create their society and write their own version of the sacred commandments. The pigs being the most intelligent animals and the only literate ones, are the authors of most of these laws. They soon realize their privileged status and thus begin to hijack the revolution. Snowball wants to create a windmill but is driven out because Napoleon has other plans and is able to convince the animals the Snowball is actually a spy. Now Napoleon takes over and the rest of the story details how greed and corruption turn him into the very thing that all animals had revolted against - human.

The metaphorical relation between different animals and different sections of the public is very beautiful: pigs - intelligentsia, dogs - loyalists, sheep - masses, horses - hard workers, raven - religious, donkey - old and wise. The transformation of the pigs from revolutionaries to brutal dictators is also worth noticing. It indicates that power corrupts everyone, however clean they may appear today. Orwell also points out the distinct features of Authoritarianism as it gradually begins to form - guilt-based witch-hunts, no fair trials, brutal punishments, lies and propaganda, fear-mongering (Jones will come back!, Snowball destroyed the windmill!), silently re-writing laws, mind-numbing praises (Dear Leader, Comrade Napoleon), chants (Four legs good, two legs bad!), songs, slogans, rituals; and suppression of thought. Anti-authoritarian also means anti-religious since God is the ultimate authority and the parallels between the farm under Napoleon and a Church or Mosque are as plain as daylight.