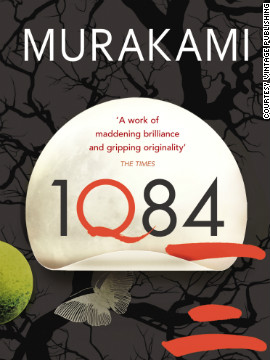 That's what the world is , after all: an endless battle of contrasting memories

If you're already a Murakami fan (as I admittedly am), you will not be disappointed with 1Q84. It has everything it takes to be a Murakami book. That said, I think it's a tiny bit more fluffy than my last read, "Kafka on the Shore", especially towards the end.

OK, this review is going to be more detailed than the regular ones, so here be spoilers. You have been warned.

The story revolves around Tengo, a brilliant student, athletic personality turned writer and cram school teacher. Aomame is Tengo's classmate, now lost love and a deadly assassin. Tamotsu Fukada (the Leader) is the supposed Bad Guy, who's daughter Fuka-Eri (or at least her Dohta) runs away from their cult, Sakigake's HQ. Komatsu is Tengo's mentor who hatches the plan of ghost-writing Air Chrysalis which was originally written by Fuka-Eri. Aomame, along with the Shizue Ogata (the dowager) and her right-hand man Tamaru, she plans to eliminate the Leader and put an end to their cult.

Let's recall the chain of events:

There are multiple suggestions throughout the book that the world might not be real and that it's all just made of paper, a sort of stage setup. So, my hypothesis is this:

Of course, there are still a lot of open questions that'll keep haunting me for days. A few plot devices are worth mentioning though:

If you haven't read Murakami, you might find this book weird and lacking in explanation. However, the contrasting and lively characters, the absurd plot devices, metaphors and symbolism more than make-up for it.